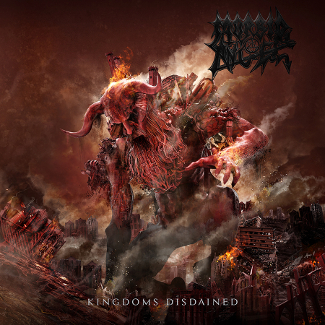 Ancient Ones be praised: Morbid Angel has gone back to its strengths on Kingdoms Disdained. Band leader Trey Azagthoth and returning champion Steve Tucker have recorded what generally sounds like a Steve Tucker-era album, with plenty of lightning-fast blast beats; many heavy, slow sections; trademark double-guitar riffing; and lots of double bass. There’s also no instrumentals this time.

There are a few welcome moments where the band tries some fresh ideas within the proper confines of its traditional sound, like on “D.E.A.D.” with its snare drum placement and “Paradigms Warped” where the guitars let the bass carry a riff.

At the same time, one song, “Declaring New Law,” almost sounds like it could be a leftover from the disastrous Illud Divinum Insanus album, and does not well serve Kingdoms Disdained. That the band put a few “traditional” Morbid Angel songs on that “I” album, demonstrating that the band could still write and perform that way and chose not to, is part of what made that record so frustrating. Any possible hints of the “I” album are not welcome here.

That aside, Morbid Angel has released a brutal 11-track album that puts the band’s catalog back on track. It doesn’t reach the heights of Steve Tucker’s first album with the band, Formulas Fatal To The Flesh, but that would be a high throw. Simply put, Kingdoms Disdained is solidly a Morbid Angel record that won’t disappoint the fan base. It’s coming out December 1, 2017 on digital, CD, and gatefold 180-gram vinyl on Silver Lining Music. Digital pre-orders are up now.