Well, there it is: After leaving fans the world over hanging about who’s playing bass and singing in Morbid Angel and who isn’t—and therefore who will perform on the next album and who won’t—David Vincent has finally released a statement today:

“I had good communication with Trey yesterday and we agree that there are incompatibilities with regards to us working together.”

Trey Azagthoth is the one remaining founding member of the band. Vincent’s statement clears the way (in terms of public relations) for former bassist and vocalist Steve Tucker to rejoin. Both Tucker and Morbid Angel announced on the 15th that he was back in the band, but then Vincent had turned things upside down when he countered that 1) he didn’t get kicked out, and 2) he didn’t quit.

We previously posted about these and other statements that have come out from Morbid Angel and its various members, ex-members and quasi-members since the 15th. Included in one of the statements from Tucker was a vague and ominous reference to guitarist Destructhor, which to our minds put the axe slinger’s position in the band into question. 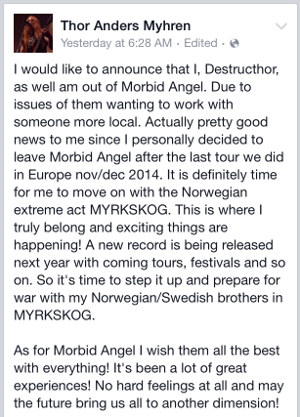 And then on the 18th Destructhor announced he was also leaving Morbid Angel. So the tally as of today is: three members have quit and one has rejoined, all inside of a week.

From here, fans and observers will no doubt be awaiting news, first and foremost, on who will be getting behind the drum kit. We’re as curious about that as anyone else.