Morbid Angel fans the world over are thoroughly confused about who exactly is in the band right now.

On the morning of June 15, the band lineup (officially) was bassist/vocalist David Vincent, founding member/guitarist Trey Azagthoth, drummer Tim Yeung, and guitarist Destructhor. That afternoon, Morbid Angel posted on the band’s Facebook: “Update! Trey is excited to announce that he and Steve Tucker are working together again for Morbid Angel and the next record will certainly be an amazingly sick world beater. Hi5!” 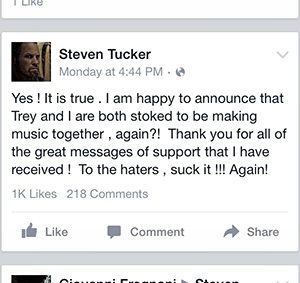 Steve Tucker is a former bassist/vocalist for the band. Following the announcement he posted on his Facebook page (verbatim): “Yes ! It is true . I am happy to announce that Trey and I are both stoked to be making music together , again?! Thank you for all of the great messages of support that I have received ! To the haters , suck it !!! Again!!”

Turmoil began a few hours later when Vincent released a statement through his publicist saying, “I am aware of Trey Azagthoth’s announcement of a collaboration with Steve Tucker on new music. However, the inference that I have left Morbid Angel is incorrect. To be clear, I have not left Morbid Angel nor have I been asked to do so.” 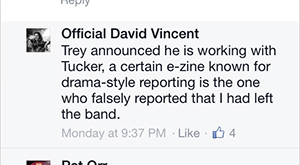 Vincent reinforced his position later that day in the comments on his Facebook with replies such as: “Trey announced he is working with Tucker, a certain e-zine known for drama-style reporting is the one who falsely reported that I had left the band.”

To add to all this, again on the 15th drummer Tim Yeung announced on Blabbermouth he left the band “due to financial differences.” 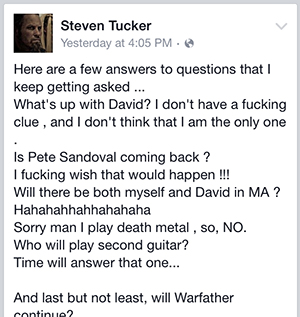 Tucker posted on June 17 on his Facebook page, answering repeated questions on the status of the band. One interesting scrap of information he gave in reply to the question “What’s up with David?” is “I don’t have a fucking clue, and I don’t think that I am the only one.”

Also of note is his reply to the question “Who will play second guitar?” which is “Time will answer that one.” This could indicate that Morbid Angel will once again pair down to a three piece, or another guitarist is coming in. Morbid Angel’s website still lists Destructhor as one of the guitar players, although the band hasn’t updated the site to reflect the departure of Yeung. 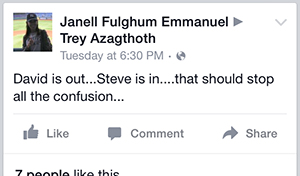 The day before on the 16th, however, Janell Emmanuel, who apparently is Azagthoth’s mother, posted to Azagthoth’s Facebook page: “David is out. Steve is in. That should stop all the confusion.” (Emmanuel has posted news about the band off and on over the years.)

Related:
– We ran a poll on former Morbid Angel drummer Pete Sandoval.
– Here’s some photos we took of the band from MDF 2012.