Rituals Of Power is the upcoming new album from Misery Index, a death metal (or grindcore) band that D.U. has written about more than once. We’re looking forward to it coming out because it’s more of a regular, down-home Misery Index record than the last album, The Killing Gods. That last one was a great record, but this new one is less fancy, if that’s the right word. 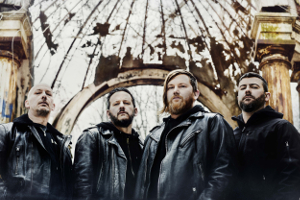 Still, there’s variety, with mid-paced tracks like “The Choir Invisible” and the title track, and catchy tunes like “New Salem,” alongside other songs that have plenty of blast beats and guitar shredding, which is part of the band’s core sound. As Misery Index likes to do, the album starts off slow, heavy, and busy on “Universal Untruths” and then shifts into fast, brutal, and busy with “Decline And Fall.” A few minutes into the latter track the band downshifts into a show, crunchy riff. There’s some licks that recall The Killing Gods, and dynamics are high on the agenda.

On the whole, Rituals Of Power seems a slower record than some of the other ones. Fewer blast beats allows more room for head-bobbing and circle-pitting riffs and beats. Another cool feature is the band making a bit of space here and there for Jason Netherton’s bass guitar, which D.U. is always in favor of in metal: turn up the bass!

The album features the track “I Disavow” which came out on a 7” of the same name last year from Vitriol Records. Lyrically, “the central theme of the album is the concept of truth,” the band writes. “Each song directly or indirectly tackles how truth has been constructed and molded throughout history as a means to uphold power, regimes and ideologies.” This sounds like proper Misery Index subject matter.

Check out the videos the band has released so far in support of the record:

“The Choir Invisible” lyric video (which originally premiered over at Loudwire)

On top of that, there’s a few drum playthrough videos to promote the record. Drummer Adam Jarvis is known for technical, breakneck speeds and pummeling on the drums. Sick Drummer magazine premiered one of his playthroughs, and DDrum put another one up on their YouTube channel:

Rituals Of Power comes out on March 8, 2019 on Season Of Mist. The label has a bunch of different formats on pre-order, like cassette, vinyl, CD, CD box, and digital. The guys are hitting the road in Europe and Japan in March, so watch out for that too. Seeing the band live shouldn’t disappoint.