Asphalt Graves is a new band from Jason Netherton, known for his other band Misery Index as well as past time in Dying Fetus, and also for his book Extremity Retained. On top of that he has his metal zine archive Send Back My Stamps!

Via email Netherton described his new band to us as “pretty much death grind, kinda straight-ahead Terrorizer style, but more groove.” He added to that description: “It has my vocals on it, which certainly gives it a death metal vibe, but the punk riffs and grind drumming are ripe throughout.”

With Netherton supplying vocals (as opposed to his other bands where he also played bass), the band is rounded out by Adam Faris on guitar and Shannon Lucas on drums (the two wrote the music), and bass from Brent Purgason. When the latter three formed the band, demoed some songs and invited Netherton to join on vocals, he initially declined, but when he listened to the songs again, “I was really drawn to them. I felt like the performances were full of ripping, spontaneous energy, and I felt like my vocals might actually be a good fit.” 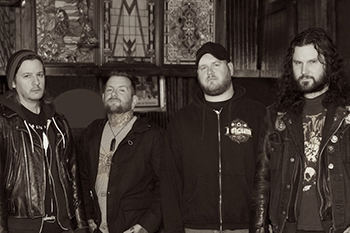 Knowing Netherton’s sharp political awareness, learning that he wrote the lyrics means we have high expectations for the content. He said his lyrics “speak a lot to the modern human condition, the sort of chaos that defines the everything-all-the-time cycle of information that bombs you with equal amounts of happiness, dread, pain and negativity. It is like this fog that never lifts where you have this perpetual anxiety and tension in everyday life that is amplified by our media systems, work demands and trying to live a life in between. So I tried to capture that.”

Asphalt Graves has recorded a 13-track album that clocks in at around a half-hour. The band is currently finishing it off and after that will start looking for a label. “The album has a pretty thick production,” Netherton said. “We were going for that Assück Morrisound ‘90s kind of thing, and so far it’s pretty close.”

As for shows, there’s no hurry: the band wants to gauge the response of the album once it’s out and see if there’s a demand for Asphalt Graves to perform live.

The band has no online presence at all presently, but plans to rectify that when the album is completed.