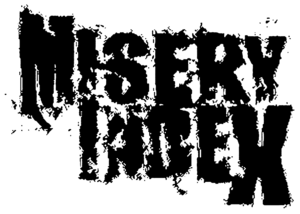 Misery Index should be well known to grind hounds the world over, even before their drummer started splitting his time with Pig Destroyer. With several albums and EPs under their collective belts, Misery Index crunches and grooves and blasts their way through intelligent, political music.

The latest release from the band, coming February 19th in North America from Season of Mist, is Live in Munich, their first official live recording, captured on tour in 2012. How the release came about, bassist and vocalist Jason Netherton explained to D.U., was that a German friend of his, Dennis, who had a mobile recording unit, made Jason an offer: Dennis would come to whatever European show they wanted, record the set, and give it to the band for free.

“And honestly, I didn’t take it seriously, ‘cause you kinda get those offers, not all the time, but every now and then,” Jason said, which often would never work out or come out right. But despite that he suggested Dennis come to the Munich show, which was a week into the tour. The band would be warmed up by then.

“He showed up and he set up, and, like I said, we weren’t taking it seriously. We weren’t even really prepared … It ended up being one of the worst shows of the tour for us, performance-wise, we thought. ‘Cause [a stage guy] was blowing this smoke machine. He was blasting Adam [Jarvis] out—he couldn’t even see his cymbals, it was so thick. And we were all hung over from the night before … The monitors were terrible; we couldn’t hear each other.”

Dennis went back and assembled the recording anyway and sent it to the band. Jason was surprised at the quality: “Apparently we still played tight. We were just unaware of how much we were locked in with each other.” Dennis could have fixed all of the errors he found in the performance, Jason said, “but he also didn’t want to fix a lot, ‘cause he wanted a natural, sort of a raw, live presentation, as it should be, and we agreed. And it was there. It was not super-tight, but there were a few moments where it was obviously wrong notes sticking out, so he could fix that.”

Jason continued, “Another thing is, this kinda music isn’t really—it doesn’t translate that good to live recording, ‘cause it’s so chaotic, there’s so many dynamics, and it’s really hard to capture it and make it interesting and listenable. In that sense, it almost has to be closer to a studio production, like more aspects are controlled, to give it some sort of—it’s just hard to capture that energy live, ‘cause there’s just so much shit going on.”

But Jason summed up the recording by saying, “It was something we didn’t plan on, and it came out pretty good.”

As for the package, “It’s gonna be 500 press, hand numbered but in a die-cut sleeve. I have this record from this band called Spooky Tooth, from, like, 1973, this English kinda rock band. [They] had Mick Jones from Foreigner in it before Foreigner, and they had this killer die-cut sleeve where it’s just all black and it’s the shape of a man’s head in the cut, and you see through to all these different sort of psychedelic scenes. And you pull out the sleeve, and it reveals all this other shit around what you can see through the sleeve of the guy’s head …. It just sort of changes the whole concept of the design, ‘cause it’s like, you can only see parts of it through the sleeve.” 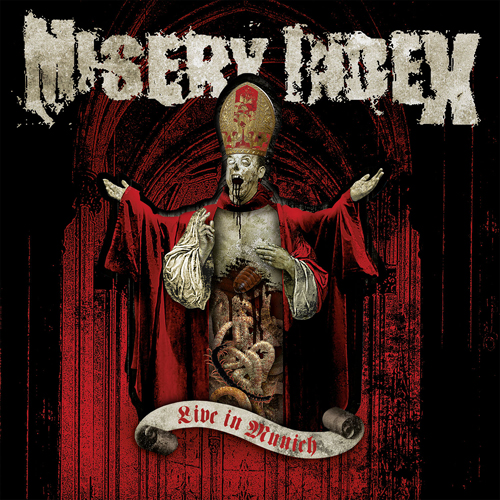 With Misery Index’s packaging emulating the classic record from Jason’s collection, their original artwork, the limited pressing, “and our own love for vinyl, we wanted to have something special,” Jason said. It sounds like they achieved that.

Pre-order the LP, which comes with a digital download, from Season of Mist.

For more info on Misery Index, visit their Facebook page.

– Live photos of the guys from 2005 at the D.U. gallery.
– Interview with Jason for his old Demockery.org blog in archive zine issue #38.