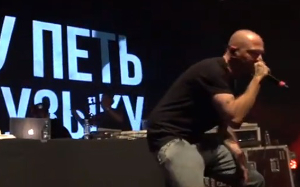 The above headline might not come as a surprise, but Human Rights Watch (HRW) has a new piece detailing what some parts of the Russian government and other officials are doing to rap, punk, and electronic groups: pressuring or outright forcing the groups or promoters to cancel gigs and tours.

Some of the targeted groups include the rapper Husky, electronic group IC3PEAK, and the band Friendzone. HRW shared details of authorities coming to their gigs and forcing the clubs to shut off the electricity mid-performance. Some of the groups have been harassed by police and even arrested and detained.

HRW produced a video on the subject:

HRW noted in its piece that the special rapporteur in the field of cultural rights for the UN Human Rights Council once wrote in a report that “artists should be able to explore the darker side of humanity, and to represent crimes or what some may consider as ‘immorality’ without being accused of promoting these.” It’s safe to say that performers and listeners of the kind of music that D.U. regularly covers should agree with that.