In the death metal music scene internationally, there’s plenty of festivals for the discerning death metal fan from which to choose. One of the highly regarded annual events is Maryland Deathfest, or MDF, which has been the subject of a trilogy of Woodstock-style documentaries (on which your humble editor worked, from Handshake, Inc.). There’s a new documentary on the scene created by a different crew of people, however, called Welcome to Deathfest. They (Pendragwn Productions) filmed at MDF XI in Baltimore, Maryland, 2013.

We reached two of the filmmakers via email, and Tom Grahsler (creator/director, producer and more), explained, “With Welcome to Deathfest, we really wanted to pull back the curtain a little bit on what this community is, how the festival works, and how the ethics and values of the community affect the planning process of MDF. Basically, MDF is a foil for modern DIY culture. We wanted to take that idea and make it accessible to the general public. It is a documentary first and a concert film second.”

Alicia Lozano, also creator/director and producer on the film, concurred, saying that the original Maryland Deathfest: The Movie trilogy “is very much a music-driven movie, while Welcome to Deathfest is more of a profile. When we conceived this project, both Tom and I felt that it was important to tell the behind-the-scenes story. Yes, it would be about the music and the fans, but it would also be about the organizers and what goes into creating something this huge. We didn’t want to be too ‘insidery,’ and we wanted to give people who don’t know about metal the opportunity to enjoy this outsider culture without feeling condescended to or ignored. The outside viewer is as important to us as the rabid metalhead.”

The filmmakers are in the middle of spreading the word about the film—at least two of the crew can be seen at large metal concerts around the Baltimore/D.C. Metro area passing out flyers for the film—and getting it screened. They premiered it in 2014 on May 9th at the Maryland Film Festival in Baltimore. 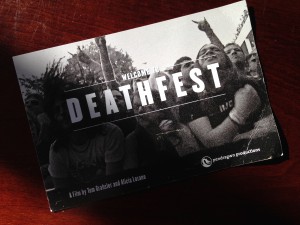 “I think the screening went very well,” said Tom. “It was nice to have a bit of an audience that isn’t necessarily into heavy metal. Festival screenings give us a chance to show the film to a world outside of the metal community. I think Welcome to Deathfest is pretty accessible to a mainstream audience, and it was great to get a reaction from a crowd that doesn’t necessarily know the difference between goregrind and crust punk.”

The screening was a little scary for Alicia, she explained, “because the audience was not necessarily from the metal community. Personally, I was more worried what outsiders would make of the whole MDF thing. And from a journalism perspective—I’m a full-time reporter and editor—I’m more interested in what people think of the narrative and the storytelling aspect.” She added, “Hearing what a film critic or what an outsider thinks of the project as a whole can be really terrifying!”

At MDF XII this year, the latest installment of the festival, which took place over Memorial Day weekend, the Welcome to Deathfest crew screened the film at the pre-fest party by projecting it on the wall at the Ottobar in Baltimore. Tom remembers that it was “a load of fun. I was personally a bit nervous, especially since half of the audience appeared on the film at some point. During production we wanted to make sure that we stayed true to our audience. Too often the metal community is stereotyped or written off. I think that the MDF screening was a good proving ground for us to make sure that we were portraying an often contentious community in a fair light.”

Alicia also felt the screening went well. “Going into it, I wasn’t sure how many people would show up for the film. To my surprise, it was a full house!” she said. “It seemed like the crowd really connected with some of the funny and not-to-funny parts of the movie. … It sounded like a lot of the audience at Ottobar had been at MDF last year [when they filmed], so that was exciting also.”

Since we’re talking filmmaking, we should talk about the film gear the crew used as well, although this will get technical. Gear heads will hopefully appreciate it! (D.U. doesn’t understand half of what’s below.)

“This is my favorite question!” said Tom. “The majority of the film was shot on the HPX series of Panasonic cameras. It was shot on P2—the HPX 500 was used for all of our sit-down interviews and basically anything with a lock off. It’s a bit of a monster to carry around in the heat for 13 hours a day, so for the concert footage and the roving camera stuff we shot on the HPX 120.

“This year, we went back to MDF and did some follow-up interviews with Ryan [Taylor] and Evan [Harting, the two MDF organizers] that might eventually make it into a different cut of the film. That stuff was shot on our new Black Magic Cinema camera. That camera uses prime lenses, so for our beauty shots of the festival we used that, and we switched back to the HPX 170 for any roaming/concert footage again.

“Audio-wise, I run a Sound Devices 322 analog mixer. It’s got an awesome analog compressor in there that makes everything sound beautiful. I dump that out to a TASCAM 2 channel recorder. The mic I used for everything is my trusty Sennheiser MKH416 shotgun mic. All the audio in the entire piece was recorded through this rig. I’m pretty proud of my on-the-fly audio mix for our music. I would mostly post up about 100 feet back from the speakers and stick the boom straight up into the air and record at the lowest gain possible.”

And as they should, Tom and Alicia are looking to the future. Tom said, “Right now the film is in its screening stages, so we are trying to build enough momentum to get the attention of distributors. We are waiting to hear back from a handful of film festivals now. We are also setting up our own screenings in a few cities. We would be happy to screen at other events in the future. The ultimate goal is distribution—if that were to look like a DVD or a streaming deal, it all sounds good to us.”

Check out clips from the film at the Welcome to Deathfest website.