The reunited, reactivated Godflesh has been firing on all cylinders lately. After a successful mini-tour of the States (D.U. took pics and video at the Philly show), the band released the Decline & Fall four-song EP, and it crushes, as it should.

The songs are minimalistic, old school Godflesh, and mean. They don’t have the same dirt and brutality as an album like Streetcleaner, but a menacing and darkness to them, reminiscent of Pure or Us and Them in the riffs. 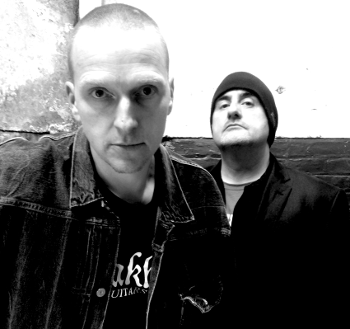 We’re assuming singer/guitarist Justin Broadrick played his newfangled 8-string guitar on the recording, but Godflesh was never a stranger to downtuning anyway, even when Broaderick employed a measly and traditional six-string.

Grab the record over at Avalanche Inc.’s Bandcamp, and save your strength for the coming full length, A World Lit Only By Fire.

Related: our Godflesh interview from 1991 in zine archive issue #36.