Perpetuated is a newer death metal band from Washington D.C. that, when we posted about it last year, we described as rooted in punk and grindcore. It’s more correct to call the band death metal musically, but the grindcore angle is present in the lyrics. That’s evident on the new 7″ EP Chains Of Industry, a record that D.U. has been looking forward to hearing. There’s Terrorizer-like lyrics such as “Exploited and abused / Conditions abhorrent / Bred to die / A lifetime of torment” from “Deathbreeders,” and more pointed lyrics like “Locked up and forgotten / Great land of the free / Content to pocket profits / From prison slavery,” from the title track. 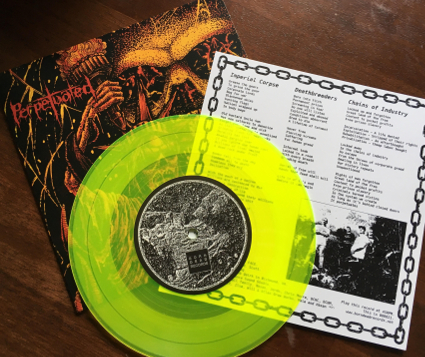 While the band is high energy and loose live (see below), and it’s fun watching the two guitar players trade solos, on record it comes off as a little sloppy when the singer doesn’t stay on the beat. (We’re assuming it was a conscious decision to leave those takes on the record for a dash of youthful lightheartedness.)

Trump’s severed head is tucked into the sleeve artwork (Kathy Griffin and Brujeria beat Perpetuated to it), which isn’t surprising since the bass player released an anti-Trump compilation on his Born Dead Records label. But the ectoplasmic colored vinyl is a nice touch. And the songs are raw and brutal, which is a good way to present death metal.

Chains Of Industry is out now on Born Dead Records for $8 and it’s on Bandcamp for the low, low price of $666.