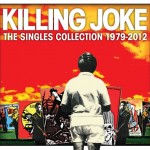 We love us some Killing Joke around here, so this review is going to be easy. The title of the collection says it all: from the first album through to the latest, which covers the many musical phases the band went through, from proto-punk and industrial-ish to dancy to new wave to metallic and back. A handful of talents have played drums besides the original sticksman, such as Martin Atkins, Ted Parsons (for a tour) and most notably Dave Grohl. It’s a terribly influential band, and interesting in that their songs are generally repetitive, but have enough subtlety to stay fresh, if you listen for it. The band is also very political lyrically.

To get one’s hands on this collection, one can do a digital download; order a three-CD set that includes rarities (unreleased songs and demo, alternate and compilation/soundtrack versions); or a “super deluxe” version with the rarities plus b-sides, a book, and a bunch of other stuff.

The rarities disc alone is worth the purchase, and Decibel Magazine is streaming a track from it over at their Deciblog.

The collection isn’t coming out till May 6 on Spinefarm/Universal, but here’s pre-order info:
3 CD version from Amazon UK
some sort of digipack version from What Records
super deluxe version via PledgeMusic

The band is doing a tour to support the collection. Dates follow.