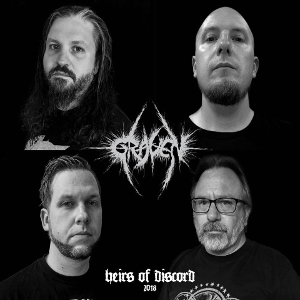 Graven is back after a long hiatus with another five-song EP (plus a Human Remains cover). We reviewed the band’s first recording favorably back in 2013, and this new one, Heirs Of Discord, rocks too. The familiar vocals of singer/guitarist Peter Maturi, along with the menacing, wiry riffs he’s so good at writing, lead the songs. There’s a mix of blunt force and dynamics, along with lots of twists and turns, in the music that makes this EP a win for fans of downtuned axes and screams and growls. This recording has the right title, too, since there’s so many discordant riffs in the songs (a good thing).

Something that’s different this time is the band added a bass player, none other than Ted Patterson of Human Remains.

Like the last EP, Heirs Of Discord is up on Bandcamp.

Related: We interviewed Patterson on his work with GridLink