We previously reported on Phonocut, with which you’ll be able to cut 10″ records when it launches, but there’s another product that’s already out in Japan called Easy Record Maker (in Japan it’s Toy Record Maker).

The design of Easy Record Maker is quite different and it works with 5″ records, but the basic functionality that you can plug a sound source from your computer or phone into the machine and cut a record of it is similar. Inventor Yuri Suzuki ran a demo on Instagram Live on April 3. Grace Ebert gathered some more info over at This Is Colossal. 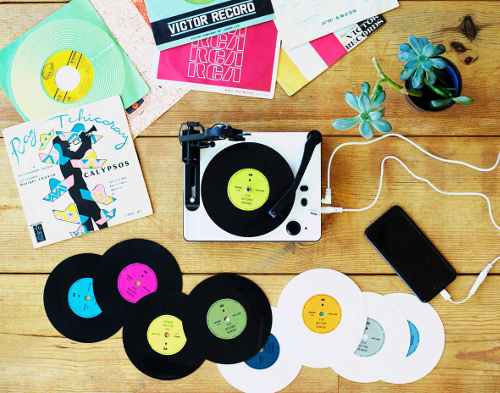 Similar to Phonocut, you can buy more 5″ records (Suzuki refers to them as discs), but Easy Record Maker also comes with some colorful starter sleeves and labels for the discs and, in the Japanese version, a booklet packed with info and interviews. He said he hopes to have the maker out in the US and the UK this year.

Another crucial difference between Phonocut and Toy Record Maker is that Gakken, who released the machine, is marketing it as an Adult Toy Magazine product, which means that you put the whole machine together in order to use it as part of the fun. Shimamura Music shared a time-lapse video of assembling Toy Record Maker.

Suzuki shared in the Instagram Live demo that one can cut onto CD-Rs and DVD-Rs as well. D.U. is guessing that this might have been a functionality that was found out after the product launch: Suzuki retweeted a post where somebody cut a recording onto what looks like a laminated photograph, so the possibilities for material to cut recordings onto might be many.

Suzuki also explained that he struck a balance between quality of the recordings and the price tag of the product. It looks like the Easy Record Maker will be a blast, though. Follow him at the Instagram link above, on Twitter, or at his website.