The new album is surprising because of its mix of grindcore, which is what fans were expecting, and a sort of traditional, uptempo death metal influence in the riffs. The album has a very old-school, raw meat feel to it (a few bits are reminiscent of the first Carcass album), but then some of the songs sound fresh at the same time because of the riff ideas. 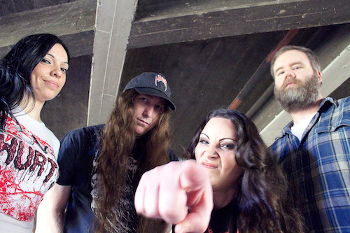 There’s a very large Repulsion influence as well, and there’s nothing out of order there. Nor is it surprising since guitarist/singer Marissa Martinez-Hoadley and drummer Col Jones have been clocking time in that band (we ran a feature about Jones getting a fill in for a few Repulsion live dates).

Another interesting aspect of Stranger is the lyrical content. It’s been getting notices in album reviews elsewhere because the song lyrics read like short, abrupt, demented stories. It’s not the usual thing found on a grindcore record.

Anyway, the whole album is streaming over at No Clean Singing, which is appropriate because there is no clean singing on this album.

Stranger came out on December 9 on Relapse. It’s worth checking out, if for no other reason because it appeared on more than one best-of-2014 list.