Tom Malenski was a staffer at The Ottobar in Baltimore MD who was killed while helping to escort someone out of the club. The club released a statement about it on Facebook. There was a widespread reaction in the music scene in that city, with an outpouring of condolences and remembrances of Malenski, and two shows were quickly organized to raise money for his family.

All of the bands that played the second of the two shows has one or more member who works at the Ottobar, and the grindcore band Triac fits that bill. D.U. has a lot of love for Triac, partially because your editor used to be in that band, but also because Triac is totally straightforward and brutal, as the below video from our YouTube channel demonstrates.

Here’s the poster for the show: 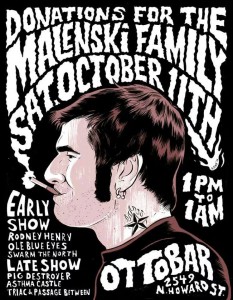