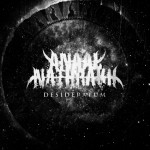 It sounds like the Brits in this two-man black metal/grindcore band are going for more of a digital sound, or are embracing it more, than on a record like Vanitas or Passion or Hell is Empty and All the Devils are Here. In “Monstrum In Animo” and other tracks on Desideratum you can hear clipped accents, like they aren’t interested in any natural “band” sound at all, and digital “scraping” sounds are all over this record. “Unleash” and “Rage and Red” have blipcore-type drum hits. 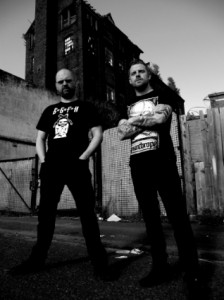 As for the music, “A Firm Foundation of Unyielding Despair” has a wad of groove-metal parts that are surprisingly cheesy, but other than that, it basically sounds like another shredding Anaal Nathrakh record. The singer, V.I.T.R.I.O.L., is still busting out the screams, gurgles and operatic vocals combo, and more; he’s as versatile here as ever. The multi-instrumentalist Mick Kenney is still delivering black metal-style riffing, off-the-hook leads and tons of blast beats on the drum machine. And really, what else do you want from these two?

Desideratum is coming out on October 28 on Metal Blade where you can also hear the track “Idol.” They’ve posted a couple other tracks off it too:

“The One Thing Needful” at Noisey

“Monstrum In Animo” at the Deciblog

Hell, the whole album is streaming at Revolver.

The band is hitting the road this year as well:

Related: Anaal Nathrakh has previously turned up in our “Musical Darwinism with JR Hayes” column in 2012 and 2013.