Carcass is back again with a new release; more touring, which they’ve been doing a lot of since the last album came out; and a new EP of bonus tracks. 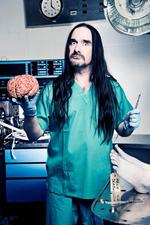 Surgical Remission / Surplus Steel will be released on Nuclear Blast. The label put out a comment from singer/bass player Jeff Walker about the EP, which read in part: “Well, let’s call this tying up loose ends. We thought we’d make all the tracks available from the Surgical Steel album session available on an EP… just in case you bought the Jewel Case version, DIDN’T buy the Digipak, didn’t buy the Japanese Import, or maybe you never bought the Decibel Magazine issue with the flexi disc. Well, here you go; ALL the songs on one disc along with an previously unreleased track.”

The EP will be released on CD and 10″ vinyl on November 11 (North America), November 14 (Europe) and November 17 (U.K.). In the meantime, Carcass posted another video from Surgical Steel, for the track “The Granulating Dark Satanic Mills,” and here it is below.

We previously posted the last Carcass video, for “Unfit for Human Consumption,” and compiled links for all of the other Surgical Steel promo videos from 2013. We also ran a poll when Carcass announced in 2012 that they were doing a new album.