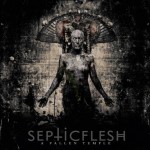 A Fallen Temple is the latest in a series of reissues of classic albums from the gothic metal band Septicflesh from Greece. Originally released in 1998, the band’s frontman handled the reissue’s remastering and new artwork, and the guys included a Paradise Lost cover and an old EP called The Eldest Cosmonaut.

A Fallen Temple reminds D.U. of the first album from The Gathering, or Hybernoid. In any case, bands don’t make metal like this anymore. The drum machine really makes it sound old. There’s a bizarre song in three “acts” that sound like it’s from the soundtrack of a play, but not out of place on this record. But it’s a very ambitious record, with different vocal styles (one being death metal) that don’t compete with each other, and dark, passionate, thought-out melodies.We’re not familiar with Septicflesh; the first song we heard was “Annubis” from a Zero Tolerance Magazine compilation years ago. But this reissue has earned Septicflesh one more fan!

The album is out now on Season of Mist in LP and digipack versions.