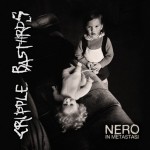 Well, the Italians are back with another grindcore record, and a goodly record it is. The production is very clean, at least for this band (as compared to, say, the Variante Alla Morte album), and has a sort of late-‘80s hardcore or crossover style of production, with the way the bass and snare sit in the mix. Fredrik Nordström produced this baby.

Nero In Metastasi features signature Cripple Bastards start-stop songs and blast beats and enraged vocals. Some of the guitar riffs are reminiscent of thrash/crossover bands of the past, which makes sense since the band has been doing this for a very long time—and knows what it’s doing. There’s also a few songs that are off-kilter and slower, and have spoken vocals, which break up the pace of the record to good effect.

The guys in Cripple Bastards are passionate about what they do, and have been prepared to risk controversy in how they expressed themselves in the past. But yes, the album rips; it’s a vicious one.

Nero In Metastasi is out on February 18 in the U.S. on Relapse Records. The label says preorders will include a free Cripple Bastards 7”. A full U.S. tour and another MDF appearance will follow this year.

Here’s a teaser that Relapse posted:

One Reply to “Cripple Bastards “Nero In Metastasi” review”