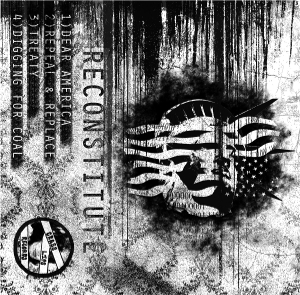 One way to get a reviewer’s attention in these days of digital promos is by sending in a physical release for review. Crass Lips Records from Florida mailed us a cassette of the latest music from the band Reconstitute. The self-titled four-song release is short, raw, and overtly political.

“On November 7th, 2016, the world changed for the worse… This is our response,” the band writes on its Bandcamp page, where one can get the digital version or the cassette of the tracks. Nothing is left to the imagination in the lyric sheet, and it almost seems like the music is just a vehicle to deliver those lyrics.

Interestingly, the band says a portion of the proceeds from the sale of the recording will go the International Campaign to Abolish Nuclear Weapons, or ICAN. Well, we can all get behind that.