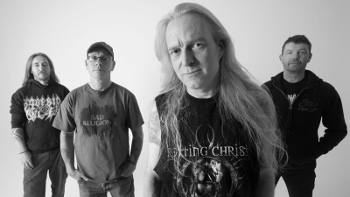 Memoriam is the British old-school death metal band with two ex-Bolt Thrower members and two Benediction members. Their debut For The Fallen is up for pre-order on Nuclear Blast Records: LP, CD, cassette, and bundles. It’s also up for digital orders. The release date is March 31, 2017.

Nuclear Blast has been pumping the band on YouTube with four official trailers and two tracks from the album. See below for videos on this new band full of death metal veterans.

Official trailer #1: How the band came to be

Official trailer #2: About the band name and album title

Official trailer #3: About the debut album

As more videos come out we’ll post them here!