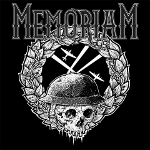 Andy Whale and Karl Willetts are old-school members of the U.K.’s Bolt Thrower. They played together for years before the band granted Whale an “honourable discharge” in 1994. In Birmingham early this year, however, the pair teamed up with Frank Healy and Scott Fairfax (of Benediction fame as well as other bands) and formed Memoriam, a self-described death metal band.

Memoriam has been moving fast, playing festivals and recording: there’s the debut, The Hellfire Demos 7″, available for order and for streaming, and a Decibel Magazine flexi due out in November. The boys announced on Facebook that they’re soon going into the studio to record their debut album for Nuclear Blast Records.

Jump on Memoriam’s Big Cartel page for lots of merch and the band’s Facebook for news updates and live appearance listings.