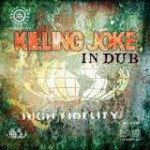 The bass player from Killing Joke, Youth, put together a three-CD set of KJ dub remixes. In addition to formerly being in The Orb, Youth has a big name as a producer outside of the band: he recently produced the new Echo and the Bunnymen album, and it’s been announced he’s going to work on the new Pink Floyd.

KJ is not a stranger to dub—it’s crept up on their studio albums before, and there’s a dub version of one of these In Dub songs as recently as 2010’s In Excelsis EP. There’s been various remixes on EPs and as bonus tracks over time on the band’s releases. It seems that some of the tracks for this set are pulled from those sources—the NIN remix was on the Absolute Respect bonus. In any case, Youth took songs from several albums for these remixes, for example multiple cuts from MMXII and Absolute Dissent; Pandemonium; Night Time; and the first album.

As one might expect from such a volume, some of the remixes are better than others, and some songs and original recordings lend themselves better to remixing than others. Some sound more organic or reggae, and some are more electronic and trippy, and some are sludgy or squishy almost. But although there are some songs, like “European Super State,” that appear more than once, your average Killing Joke fanatic should be all over this.

In a press release from Savage Gringo, Youth was quoted: “I first discovered dub in 1976. Along with many other kinds of music it became the soundtrack to my late teenage years and consistent through the rest of my life. We were surrounded by dub in Ladbroke Grove in the late 1970s … . This album has taken over a year to lovingly put together and of all of the many productions and mixes I have been fortunate enough to have been involved with, this one, I’m sure, will be one of those that tells the story best and the one that makes me feel extremely proud to be a part of the phenomena that is Killing Joke.”

The set is up at Amazon U.K.—CD, digital download, vinyl.