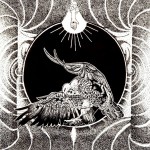 Twilight Upon Us is the new album from these Los Angelenos. One of the guitarists handed us a “tour edition” (read: hastily slapped-together copies to sell on tour) cassette at the D.C. stop on the July East Coast tour, and we were looking forward to checking the band out, ’cause we don’t know nothin’ about Columbian Necktie.

They refer to themselves as “raucous metallic hardcore,” and that’s fair, but that doesn’t mean metalcore, thank goodness. The 10 songs on the album are mostly mid-paced, with some slow, heavy tunes too, and texture between the two axes and the bass. There’s a couple songs where they turn off the distortion for a few riffs, and there’s even one where they throw in a trumpet—and it works.

It sounded like the singer had more range live than on the album, but at the same time the band was impressive—totally solid on stage. They convey emotion with their songs and do a good job of it, and they rock.

Columbian Necktie hasn’t given many details online about Twilight Upon Us, except that it’s out August 19, and at least the tour edition is on CD and cassette. Keep tabs on the band at their Facebook.

Here’s they are rocking at the show: