For years environmentalists have been sounding the alarm on the damage that construction of the Keystone XL tar sands oil pipeline would cause. Congress recently sent a bill forcing approval of the pipeline to the White House, which President Obama vetoed. 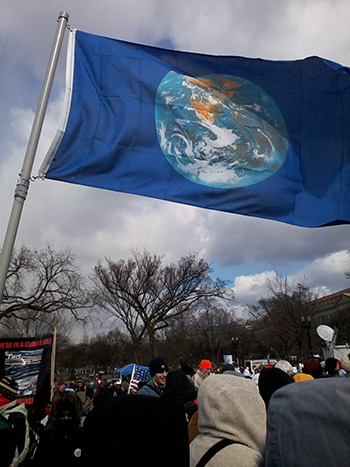 That hasn’t stopped a coalition of groups to write a “unity letter” with hundreds of co-signers urging Obama to reject the pipeline once and for all. The co-signers include several musicians like Thurston Moore (no stranger to activism, he once signed on to an open letter concerning Pussy Riot), Patti Smith, Richard Patrick, Thom Yorke, the politically active Willie Nelson and Neil Young, and many other creative types. Director Josh Fox is a co-signer as well; we referenced his documentaries on fracking in a post about one of Revocation’s music videos.

Environmental destruction as lyrical subject is nothing new to music of course, and can be heard all the way from the mainstream, like Marvin Gaye’s “Mercy, Mercy Me (The Ecology),” to the metal scene (Exodus’ “Chemi-Kill” and the above-mentioned Revocation) to grindcore (Napalm Death’s “Make Way!“—you’ll need a lyric sheet).

Photo: from the “Forward on Climate” rally in Washington, DC against the pipeline. See our photos on our Flickr page.