Revocation has a ripping new self-titled modern thrash album, and Madeline Quinn made a new video to promote it, posted at Bloody Disgusting. In the video, the band expresses a strong environmental message about fracking (or hydraulic fracturing) as well as dirty energy in general and its ill health effects. The band doesn’t appear in the video, which is cool (mixing a concept or a plot and clips of a band playing often doesn’t mesh well), although Revocation couldn’t resist showing a van with their logo on the side in a wall of fire. 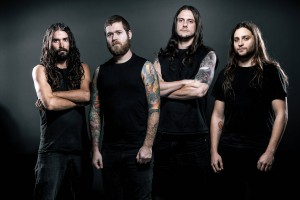 The band’s frontman said in a press release, “Lyrically this song is about the rape and destruction of our environment at the hands of profit driven sociopaths, in other words a real feel good hit to brighten up your day.”

There’s been much written about the environmental damage of fracking, but there are debates as to how safe or unsafe it is, or whether it’s a good “alternative” to coal or other forms of dirty energy. A pair of eye-opening documentary films about fracking have come out: Gasland and Gasland 2, and more info on them is at the Gasland website.