Infernal War from Poland has a new record coming out, which is of interest to J.R. Hayes; he has sung Infernal War’s praises before, for D.U. The band has released two songs to whet our appetites for the album, and J.R. gave them a spin and reviewed them for us. He began by describing Infernal War as “Poland’s black/death maniacs,” and continued:

These guys don’t have a “stun” setting, only “kill” and “obliterate.” When I’m checking out metal bands, I’m not just searching for heaviness and speed, I’m searching for meanness. I like bands who sound like they are literally trying to kill me with their music. Think Angelcorpse circa Exterminate or The Inexorable. That intense rage brings me such great pleasure. Isn’t life weird?

The track “Transfigure” is full of Infernal War’s signature vitriol, but for some reason, none of the riffs here really jump out and stick. It’s good, but not great. However, the track “Into Dead Soil” is a straight ripper, and an excellent showcase of everything that’s cool about this band. Looking forward to checking out the full-length. Hail Polish metal! 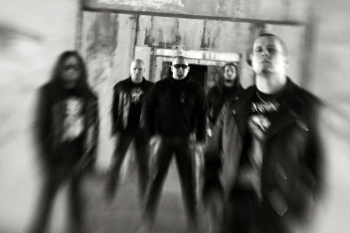 The new album Axiom comes out on Agonia on April 17 in Europe and April 21 in North America, on CD, LP, die-cut picture LP, and digital. Pre-orders are available at Agonia’s website.