Free & Equal, the folks that among other things hosted U.S. third-party presidential debates in 2012, are throwing a huge festival called United We Stand on May 10 at UCLA. The idea of the festival is to build momentum to “help unite and empower voters and build a base of supporters for young people running for local office in 2014,” and they’ve got some heavy hitters set to appear.

Besides activists, journalists, authors, members of Occupy, and others appearing at the fest, just some of the artists playing are Cynic, Public Enemy, Immortal Technique and Rooftop Revolutionaries.

“We sought out conscious musicians who have something to say with their music,” said a representative of Free & Equal, speaking to D.U. via email. “Free & Equal is an educational organization, and what better way to educate than through music.”

It was “extremely easy” getting such musicians to sign on to playing as well, Free & Equal wrote. “Most are doing this pro bono, and others for reduced costs. They see the urgency to fix our world sooner rather than later.”

There’s also a variety of sponsors as well, from NORML to Rock the Vote, the Underground Hip Hop Blog, and many in between.

Tickets haven’t gone on sale yet, but the United We Stand website has information about RSVPing. 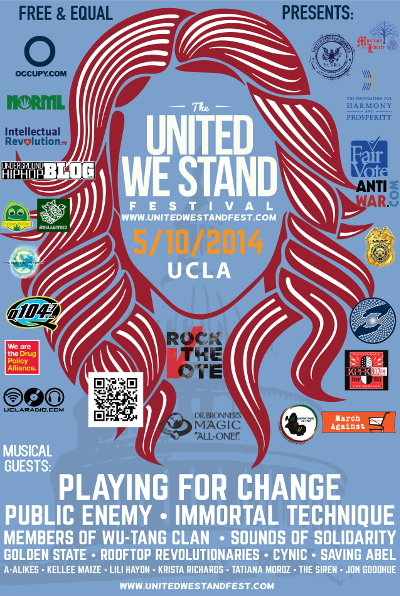 Free & Equal describes itself as “a 501(c)(3) non-profit, non-partisan organization, whose mission is to shift the power back to the individual voter through educating the public, which will result in more independent candidates being elected.”