Back in 2005, Jaz Coleman did an interview where he expressed some of his and Killing Joke’s political views as well as some forward-thinking environmental views. He did a bit of trash talking, as he does, but interestingly, also recommended a book called Tragedy & Hope by Carroll Quigley, which Coleman described as showing “the economic history of the world. Who paid for which war and why.” 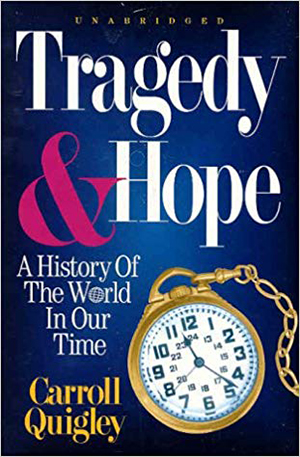 D.U. hasn’t read it, but it’s no secret that we’re Killing Joke fans around here so we’re intrigued. The book is back on Amazon in an unabridged version on hardcover and on Kindle, but there’s a PDF scan of it (whatever version of the book that is) at carrollquigley.net as well. It’s hard to tell whether that’s an official site or a fan site (it’s mostly a bunch of links).

Coleman wrote a book in 2014, Letters From Cythera: A Ludibrium, and a companion recording, The Island Symphony. You can get the bundle on Amazon.