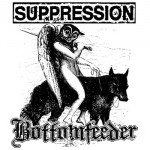 Suppression should be known by grind and powerviolence hounds that dig in the underground. The two-man band from Richmond (the most famous of the two being Ryan Perrish from Iron Reagan/ex-Darkest Hour) doesn’t sound much of anything like it did back in the 1990s, but is way more outlandish these days. One of Suppression’s two songs are instrumental but they’re both entertaining—although the band is more fun in a live setting than on a recording. Suppression is just bass, drums and vocals, with short, nutty songs and high energy.

Back in the day they Jason Hodges, the other half of Suppression, agreed to be interviewed by D.U., and it’s in archive issue #12. The band was more serious and less silly back then—not that there’s anything wrong with that.

Bottomfeeder is very much a primitive and throwback kind of thing. The band is going for that low-fidelity, powerviolence sound but the songs aren’t as engaging as Suppression or some other bands in the genre, nor do they have enough changes to keep the interest up, even though they’re under three minutes each. Bottomfeeder is a new band, though, so there’s plenty of room for them to keep working at it.

Bottomfeeder put the split 7” up on its Bandcamp page for our listening pleasure, and you can also order the vinyl from Born Dead Records.