In this second “grindcore edition” of the column, J.R. from Pig Destroyer brought over a stack of CDs from his collection and talked about them. 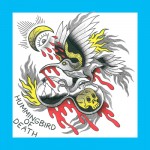 Hummingbird of Death Show Us the Meaning of Haste
The first time I heard about ’em was on This Comp Kills Fascists [Vol.] 1—or maybe it was part 2; I can’t remember which one it was. But their stuff on there was like, I wasn’t really that taken by. They seemed a little more like a joke band. But this record’s got a little more meanness to it, and it’s got some Slayer-ish moments, it’s got some kind of Infest-y moments. But cool band, cool fastcore band.

It sounds like old Cryptic Slaughter right there, like old Death Records crossover. I dunno—there’s a lot of grindcore bands out there doin’ different takes on it. A lot of it gets real same-y, you know, as part of any genre, I think. Good, solid release, by a band that kinda took me by surprise. I think it took a lotta people by surprise, actually. They weren’t really expecting like a record like this from this band.

The last time I listened to this? Prob’ly about a month ago. … I’ve had this record for a while. This is one I’ve been jammin’ for the last year or so.

I wanna say that they’re from Iowa, or some place that no one should really be from. Just one of those states like Montana, where you’re just like,“This band’s from Montana? I didn’t even know anybody lived in Montana!” Or maybe it’s Idaho. … One of those places. When you live in Virginia, what’s the difference between Iowa and Idaho, really, when you get down to it?
To Live A Lie 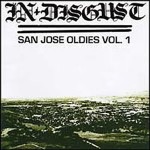 In Disgust San Jose Oldies Vol. 1
This is a band from the early-mid 2000s, and I think they just recently got back together. They’re from San Jose, which of course is about an hour south of San Francisco, I think. Not a lot of ground being broken on this CD, but this is just classic Excruciating Terror-type grindcore. They do it really well, really nasty.

All of the other records on [this compilation] sound—it’s the same kind of material, but this particular recording [the Reality Choke 10”] is just drenched in feedback and nice and gnarly. This is the sorta grind that there’s very little metal in it, you know? It’s all crust. It’s actually how I make that distinction with the powerviolence, is like they take a lot of the death metal riffs out of it. It’s more just pummeling chords and stuff. Good band, though. I was excited that they got back together recently.
Torture Garden Picture Company 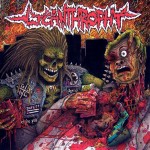 Lycanthrophy 2011 album
Total Despise You worship. I think in between songs they’re not just muting; I think they cut it in the studio, so they even took out the ambient noise, you know what I mean? I don’t know if I like how that sounds.

They’ve been around for quite a while, too. I have another CD that’s like a compilation of a lot of their old 7”es and splits and stuff, but this is a more recent album from them. I like the mean female vocals. … There’s a tiny feminine quality to them. They have that kind of shriekish element.
Bones Brigade 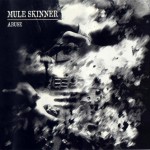 Mule Skinner Abuse
That’s pretty hard to find. They prob’ly pressed a thousand of ’em back in 1994. Members of Flesh Parade. But I actually think the drumming on this record is for me right up there with just about any drumming performance on any grindcore record that I’ve ever heard. It’s right up there with Sandoval on the Terrorizer album. He just fuckin’ rips it on this record. They did a demo and then a 7” and then that record, and that was it. I have the 7” and that’s excellent, but different drummer. This drummer is just sick.

The singer doesn’t really vary too much what he does, but he’s just—not his tone, but he kinda reminds me of Mike Williams from Eyehategod in the same way in that he’s always doin’ the same thing, but rhythmically, he’s always right where he needs to be. Y’know, he never sings too much, he never sings too little, he’s always in the right spot, and it’s very tastefully done. There’s one song early on in this record that has this one sustained blast that’s just—every time I hear it, I’m like, “Are you kidding me? There’s just no way.”

I think Ben from Soilent Green/Goatwhore, he was in a band called Hangnail with some of these guys. Back in the day they did demos and stuff. Yeah, this is definitely a lost classic from the ’90s that I wish I had known about back then, ’cause as much as I like it now, I know back then I woulda fuckin’ flipped my lid over it. Because there weren’t that many grind bands back then, you know.
Released by Sludge Records 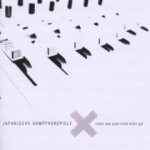 Japanische Kampfhörspiele Früher War Auch Nicht Alles Gut
This is another band that people don’t really talk about, but they prob’ly deserve to be talked about a lot. I’m sure they’re a little more well-known in Europe, but I think maybe the name is a little off-putting to people. … ’Cause even people I know who are really into grindcore have never heard of this band, you know? They’re kind of an obscure band, even in underground music. But once you get down to the music, I mean, the music’s killer.

The German grindcore scene is pretty interesting, actually. A lot of history in it, you know? And I think a lot of other bands, like the European bands like Fear of God and bands like that, they get more credit than the German bands. Like, have you ever heard Blood before? I would say almost the entire goregrind thing comes from those early German bands like Dead and Gore and bands like that. I wasn’t really that knowledgeable about their scene until recently. Some really, really cool bands.

These guys are so odd that you almost can’t pigeon-hole them as any kind of specific band. They just kind of are Japanische Kampfhörspiele. I was really psyched to find [this] when I was in Germany. They’re really interesting because, you know when we were listening to In Disgust earlier, you throw it on, you’re like, “Oh, well, this is like Excruciating Terror worship,” or whatever. You throw on Mule Skinner, you’re like, “It sounds like Terrorizer or old Napalm,” which is I’m sure what they were trying to sound like. But then you put this band on, and they don’t sound like anybody. There’s just no other band that sounds like this band, for better or for worse.
Bastardized Recordings

Gride Faster Than Death, Harder Than Life
Sick ass band. Tight as fuck fastcore band. I think their older stuff is a little more conventional. This is I think some of the more recent stuff, so it’s got a little a little bit more of its own personality. Yeah, it’s got some Voivod-y stuff going on in there. There’s certain chords that if you strike that chord, it’s gonna bring Voivod to mind immediately. See, it’s got that JaKa-kinda that oddball flavor to it, and maybe a little more thrashy. It’s one of my favorite European bands right now.
Torture Garden Picture Company/Indecipherable Crap Records 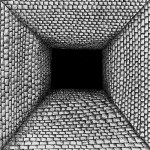 Dead In the Dirt The Blind Hole
[As for Southern Lord] they always put out good stuff, but they’ve been puttin’ out some good stuff for grind heads, which is not something that they used to do. These guys are from Atlanta. [They’re very] Dropdead, Crass. Definitely more of an American style. I love when bands describe themselves as “vegan straightedge grind” or whatever, like being vegetarian makes your music sound different or somethin’.

Kinda similar to the ASRA album that came out. That’s how you can tell they’re from the South: it’s got that feedbacky Eyehategod, Suppression kind of feedback everywhere—like even people’s shoes are feedin’ back. Everything’s fuckin’ feedin’ back. The recording’s strong, everything sounds real like surupy and gross, it’s angry. It gets a little too crusty for me sometimes with the riffs, you know, like really super simple crust riffs, which isn’t usually my thing.

I really like the direction that Southern Lord’s goin’ with some of their releases. Definitely diversifying from just being a doom label.
Southern Lord 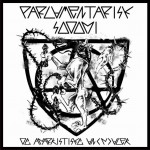 Parlamentarisk Sodomi De Anarkistiske Ancncaler
It’s a one-man grindcore band from Norway. I don’t know if he plays drums, or if it’s just a really, really well done drum machine, but this shit is just—it’s so raw. Track 11, there’s a song on here that’s 10 minutes and 46 seconds. You know, the 11-minute grindcore song has been attempted, but they might pull it off on this record. I mean, it’s just—it’s fuckin’ epic, man. Kind of a mysterious band, too. I don’t know if they’ve ever played live, I don’t know if I’ve ever seen a picture of this guy, don’t know much about him other than he’s from Norway.

It’s a very mean and—even for a grindcore record it’s aggressive, and maintains a pretty good intensity level throughout. It’s raw, but like you can hear everything, they throw some rippin’ solos in there for ya. Again, it’s another band that I think people are kinda put off by the weirdness of the name and a lot of the lyrics are in Norwegian. Again, they don’t really play live, so that makes ’em even more obscure. But yeah, for those in the know, this band is pretty sick.

[As for the drums] it sounds so natural. It really sounds to me like a real drummer. Just how raw everything is, it sounds so raw, it doesn’t sound like a drum machine to me at all. But because it’s a one-man project, it would lead you to believe it’s probably a drum machine, but I dunno.
Haunted Hotel Records

Check out the previous editions of J.R.’s column:
February 2013
November 2012
and there are several more in the ’zine archives.

One Reply to “Musical Darwinism with J.R. Hayes”