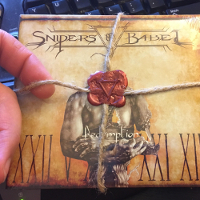 Mike Bossier has been in more than a few bands from Maryland over the years and he’s recorded countless records in his Oblivion Studios. He’s back with his latest metal band, Snipers of Babel, and the album Redemption.

Bossier’s going for a cacophonous sound with five vocalists and lots of keyboards. There’s plenty of shredding death metal, as on “The Fury,” and some groove metal (that’s Bossier’s jam) on the title track. It’s no surprise, then, that his band covered “Another Body Murdered” for the record, originally a collaboration between Faith No More and Boo-Yaa T.R.I.B.E. for the Judgement Night soundtrack. 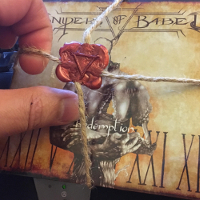 Have-drums-will-travel superstar Kevin Talley lays down the drums, and he’s just as good at blasting here as he is bringing heaviness to apocalyptic album closer “The 25th Parallel” (no surprise there either).

The record’s up on Bandcamp, and on CD (which features a nice touch with the packaging, pictured here) from Lost Apparition Records.