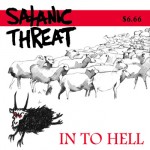 A tribute to Minor Threat in composition, performance and production, In To Hell is absolutely hilarious. It’s a 7” the band released a few years ago along with the audio from the lone show they played. And the latter even has a Minor Threat cover.

It’s a total blast from the past, and not just a joke, either—it’s a total old-school hardcore holocaust.

A Q&A with Satanic Threat over at the Deciblog provides some background on the project. Excerpt:

Are you straight edge?
Hell no.