Reeking Cross is only the latest musical project from a multi-talented guy named Mason, who has a long connection to D.U. He’s written countless reviews, some columns, and a few interviews over many years for us, and D.U. has recorded and performed more than our share of music with him over the years.

Reeking Cross is a noisegrind band that’s influenced as much by Nuclear Death as Seven Minutes of Nausea. If you’re not familiar, Reeking Cross sounds like what those two band names sound like. As a proper release of the genre, the cassette tape Cloaked In Vermin features 25 songs in a little under 10 minutes. The lyrics describe brief, nightmarish, disconnected moments of decay, sexual depravity, and violence. 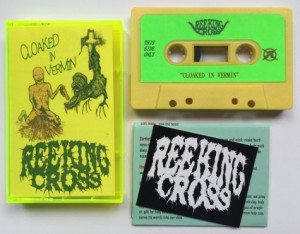 Appearing on the tape are Paul from Wadge (we interviewed them back in archive zine issue #8 for another project he had at the time, Drowning In Solitude) and the drummer from grinders Triac (who has also contributed to D.U. more than once).

For those who can’t play tapes—and it’s sold out anyway—there’s a Bandcamp page where the release is up for “name your price.”