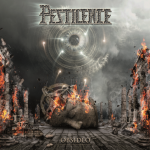 The boys from the Netherlands are back with a ripper. With 8-string guitars in hand, mainstay Patrick Mameli and old-school Pestilencer Patrick Uterwijk have recorded with new members, bassist George Maier and drummer Dave Haley. (The rhythm section is different from what the band announced on its website in the past, by the way, but no matter.)

Both blasting and grooves on the drums abound, and that later-era Pestilence feel on the guitar riffs and leads is present. As a whole the album is consistent, and while some songs blaze with their tempos, often at Slayer speed, others have crunchy and choppy riffs, and bending, corner-turning parts. On a song called “Laniatus,” it’s mid-paced beatdowns the whole time, but the next song, “Distress,” kicks off with a blast. Pestilence keeps the songs busy and the energy level high throughout the record. The band throws in several quick sound effects which spice things up further. Mameli is in good form on the vocals, pulling out his rasp and his low growl as needed on each tune. All in all, Pestilence still has it!

Order Obsideo at Candelight Records. The record supposedly is out now but is listed as a preorder on the website.

Check out an old Pestilence interview from 1991 from the Testimony of the Ancients era in this archive issue of the ’zine.