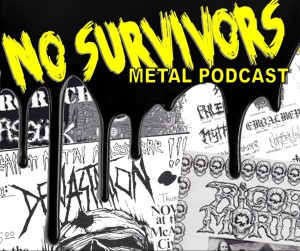 Three metal musicians get together on a regular basis and do deep dives on metal albums. That’s the format of the podcast called No Survivors. The guys (Jake, Mark, and Mason) aren’t slouches about their metal: all three have contributed to the archive version of Disposable Underground at one time or another, especially the organizer of the podcast, Mason. (But Mark has the distinction of using the phrase “there is some knavery afoot here” in his review of Gateways to Annihilation.) In addition, your editor has been in a band with all three of these guys too, and they all have cranked out large amounts of music and noise between them over the years in various and numerous bands and projects.

Each episode, they dissect, scrutinize and discuss three albums that cover a wide range of styles: thrash, death metal, hair bands; the list goes on. They have a silly sense of humor, too, although they take music seriously.

Mason explained the motivation for the podcast in an email: “Whenever the three of us would hang out, we’d inevitably start talking about metal or grindcore bands for ungodly lengths of time, usually culminating in Mark and Jake making fun of me for listening to Manilla Road until I locked myself in a toilet stall and cried.” Eventually they started doing this over Skype, but with a great deal more preparation for the conversations, so Mason could capture the talks and promote the podcast.

Listeners can of course peruse past episodes and keep up on new installments at the website. It’s worth a listen.