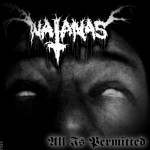 The one-man band from the U.S. has a slow-motion Celtic Frost thing going on, while combining the vocal creepiness of bands like Portal, perhaps. The guy uses gurgled vocals, a loose percussion feel, out-of-tune guitar, instrument layering, and weird samples to successfully establish a creepy “atmospheric black metal” mood, depending on the song. It’s very hard to get past the electronic drums since they’re so off time, but maybe Natanas wants it that way, like when grindcore bands try to recreate Scum.

According to the band’s bio, Natanas’ lyrics cover among other things suicide; esoteric and occult themes; and quantum physics, and they are “an encouragement for humanity to off themselves and clear the planet of their menace.” Quite a combination. On All is Permitted, the man behind Natanas explores guilt, regret, hatred, and his recovering from surgery. More and more, the record sounds self-indulgent, but that’s cool. 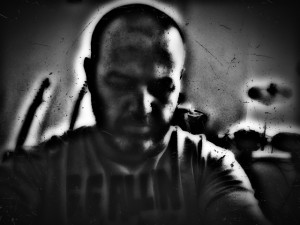 An interesting point is that while his band sounds primitive and introverted, at the same time he’s into the press game and has embraced online distribution: iTunes, Google Play, Spotify, Bandcamp. He’s DIY.

The album is name your price at Bandcamp.

One Reply to “Natanas “All is Permitted” review”