“Smooshing melodic stuff against abrasive stuff”—that’s how Matthew Michel described a typical song section of his old band Majority Rule. That formula, the band’s passionate live shows, and its lyrics earned it a strong following in its native Washington D.C. area and well beyond.

We’ve interviewed the guitarist and vocalist in the past: once while Majority Rule was active and once after it broke up in 2004. But in May of this year the guys announced on Instagram that they’re getting back together and going on tour. Michel agreed to talk to us about the band and the reunion. 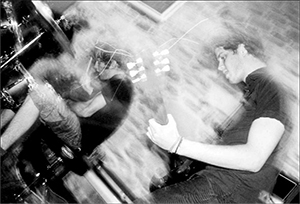 But why a reunion now and how did this happen? Speaking via email, Michel began, “A couple things came together in my head to make it seem right. First was seeing City of Caterpillar and Malady play the Black Cat. It was unbelievably nostalgic for me, and they looked like they were having so much fun. Second was Mike Taylor [of pg.99] reaching out with the idea of doing all these shows with pg.99 as benefits. The idea of being able to make a greater impact with what we could raise as bands rather than what we could give as individuals was a big motivator.”

Michel said, “I actually have no problem with bands reuniting to make a little bit of money,” adding: “The charity aspect of the pg.99 shows just gave me the extra incentive to get past the anxiety of attempting to recreate something I have such fond memories of.” 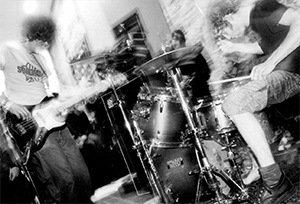 We asked Michel about the gear Majority Rule is playing now, because over the years the guys started other bands and presumably changed the equipment they play. As they prepare for the reunion tour, “I tried to use what I use now but it didn’t sound right. I found an old Marshall SLX in my basement that I think is going to work. I actually sold my JCM2000 from back then just in the past year because I never thought I would need it again. On top of that I had to get a new sampler pedal, and I’m working on recreating all the little samples we had. Kevin [Lamiel, bass/vocals] just bought the same head he used back then and we both still have the guitars we used to use.” He added that the guys are pretty much reverting to Majority Rule gear.

Michel is quite active politically. When we spoke back in 2003 (archive zine issue #27), he said “It’s impossible to say we are not political, but I wouldn’t call us a political band. … I guess what I’m trying to say is at times like these it’s pretty difficult to separate the political from the personal.” And is all that still true?

“Unfortunately it is. A lot of the things we sang about are much worse today. It blows my mind that the U.S. dropped over 26,000 bombs in 2016, and people talk about Obama as some sort of level-headed charismatic peacemaker. In the past decade any optimism I had in humanity’s ability to change for the better has pretty much disappeared.”

The band’s old website is still up and lists all of the details of the reunion shows. An old Majority Rule blog has old-school information on it.

– Our City of Caterpillar interview on their reunion
– Our second Majority Rule interview, from archive zine issue #31, 2005