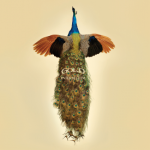 GOLD is a Dutch band whose album is a rockin’ good time. There’s bits of Danzig and maybe the Quorthon solo album in here, along with perhaps a Melissa Auf der Maur and The Devil’s Blood sprinkle. Also, the ’80s glam rock scene has rubbed off on the boys and girl in GOLD. The band goes for somewhat of a heavy edge in the drum mix and playing, and a bit of snarl in the vocals, which is great, but the songs, with their verse/chorus format, are catchy and unassuming. The songs cover some territory on the album. One thing you can’t accuse GOLD of is sounding the same all the time.

Here’s an odd and NSFW video for one of the tracks from Interbellum, “Love, the Magician”: