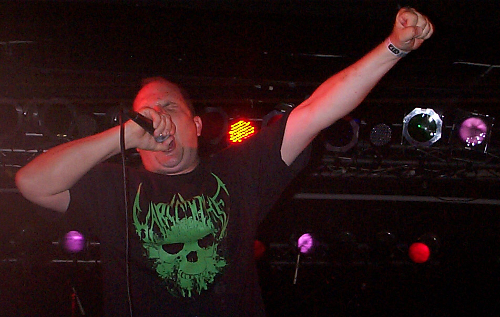 In the ‘zine archives we’ve gone to Pete Ponitkoff, singer from Agenda of Swine, a couple times over the years for tips on what we should be checking out. Below is the latest edition of his column, which he pointed out he wrote in his comfortable one bedroom apartment “in the hippy kingdom known as Marin County,” CA. We asked what he’s been listening to lately.

“Right now, The Evicted, a punk band which has its roots going back into the early ‘90s,” Pete said. He provided some background on the group, that its members’ histories are tangled up with bands like The Endorphins, Outdated Concept, Nitro 454, Decapitated Sheep, Blown to Bits, and his old band Benümb. And he singled out another one of those connected bands, The Need. “How can you put their impact into words? It required to be witnessed.”

Pete said the Evicted played their first show years after releasing their first, self-titled record. “The minions in attendance were chanting the lyrics louder than the band.” The second record, Distorted Truth, came out over a decade after the first. “You would suspect a little ring rust after stepping out that long. Not the case here,” he said.

Pete let us know that Agenda of Swine is in the studio, mixing demos of new songs for another full-length album. During the session, producer Greg Wilkinson turned Pete on to a band called Leather Glove.

“This is were you start taking notes, kids,” Pete told us. “Heavy, fast, with the most deep vocals expressing the deepest hatred.” He added that Leather Glove doesn’t have an online presence yet, so we’ll just have to keep our eyes peeled until the band releases its recording.

We’ve interviewed Pete more than once in the zine archives:
– Benümb in issue #26
– Agenda of Swine in issue #38
– We had a discussion with Pete about his tour of duty in Iraq in issue #40