Take slowed-down heavy metal, grindcore, jazz, Anton LaVey, Nietzsche, Lovecraft, and the Necronomicon, and you’ve got part of what made up the band Cattle Press. Eddie Ortiz played guitar and sang in Cattle Press, which was from Brooklyn, NY. The band was well appreciated in its time and it still is. 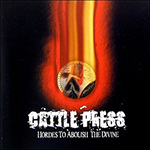 Ortiz told D.U. over email that he’s known Roy Fox from Necroharmonic “for about 25 years. We were deeply involved in the early ‘90s death metal scene, we would kick it at shows, and obsess over the rawest, most putrid death metal crap we could find.”

Initially, Necroharmonic only wanted to reissue the Cattle Press demo, and this idea morphed into the discography. “Not sure why we finally decided to release this music now, but everyone that has made noise with Cattle Press can agree that it’s about fucking time.”

Ortiz explained that the band had what he called a “multitude” of lineup changes “which plagued the group for years.” Eventually he and guitarist/singer Joe Capizzi decided to fire their drummer, Sean McCann, for musical reasons and they hired Harley Flanagan, best known as the bass player/singer for the Cro-Mags. “Not sure what the fuck Joe and me were thinking,” he admitted. “Harley is an amazing musician, and if he put in a bit more effort on the drums, he would have been a perfect match for the group. Long story short, we went through two more drummers after Harley, and then decided to call it a day.”

We suggested to Ortiz that Cattle Press had a unique sound, and no band since has replicated it.

“I can agree: me and Joe have a pretty unique writing style, and it’s great to see contemporary bands that still dig on the Cattle Press stuff. I can definitely hear a little influence of ours here and there, which definitely drives me with creating new shit.”

Which brings us to Ortiz’s career since the breakup. He’s been involved heavily in music after Cattle Press. While he said most people in the hardcore scene know him from his days in Candiria and Subzero, he also played in God is I, Vehement Serenade, Harley’s War, Celebrity Murders, and Villains. “Also, I have to add I was told I was too metal for Sheer Terror. I love that story. I’m sure I forgot a band in there somewhere.”

Ortiz has another project: “The Sheltering Sky is my new baby, and in a lot of ways it’s a continuation of the same Cattle Press spirit. We have talked about possibly playing a few Cattle Press tracks live down the line.”

Then there’s DYT, “a nine-piece Afro/Latin/soul/rock band that I’ve been cooking up in the lab for the past two years or so. Half of the band calls the group Diez y Tres, and the other half calls the band Do Your Thing. That’s what happens when you get nine people in a room,” Ortiz laughed, and continued, “we couldn’t be more excited. It’s taken me a long time to play this type of music, and I’m still learning. I think people will be pleasantly surprised when they hear it; we are the real deal!”

Eviscerate is another group. All-around drum master Dave Witte posted on Facebook that the band (formerly called Iabhorher, and featuring Joe Capizzi) had a band practice after a 20-plus-year break, which included Ortiz. “I’m into going into unchartered territory, moving forward, but a little nostalgia never hurt anyone,” he told us.

There will be plenty of nostalgia when the Cattle Press discography comes out, sometime in 2016.

– We interviewed Ortiz about Cattle Press back in 2000 in archive zine issue #24.