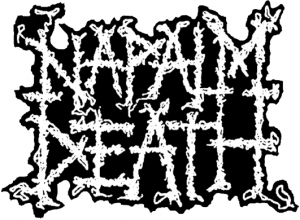 The following Q&A with Napalm Death was originally intended for a special section about grindcore that ran in Zero Tolerance magazine from the U.K., but the conversation ended up running in Violence magazine #7 from Poland in 2005 instead.

At the time of this conversation, conducted at one of their tour stops in support of then-current album The Code is Red … Long Live the Code, Danny Herrera and Barney Greenway (drums and vocals respectively) shared their views on grindcore. They also talked about Carcass and Infest, but there was no way of knowing that Carcass would start touring again in 2007 (let alone record) or that Infest would be booked for Maryland Deathfest in 2013. How things change!

Just in a very general way, what do you think of the current state of grindcore, whichever way you want to talk about it?

Danny: I don’t know, man. At the moment I see black metal being very popular. I think to be grindcore you kinda have to be from the old days and still be around today to be it, because which bands you consider to be grindcore up to now? We seem to be the only band with that tag, to be honest … there was Brutal Truth and all that … Nasum, obviously, but they’ve been around for ages. They’re grindcore.

“There’s some fucking good bands out there, man. There’s some obscure bands that are even better.”

Are you referring to, as far as the big, recognizable acts are concerned?

Danny: Pretty much, yeah, ‘cause there’s a lot of underground bands that don’t even have [larger] record deals that are grindcore. I just don’t know about ‘em.

Barney: It’s pretty buoyant, man. I mean, there’s different bands comin’ in from different perspectives, you know? Not every band’s a political band, which is fine, because there’s room for everyone basically … I think that as long as people aren’t ignorant, that’s all that matters to me, you know? … There’s some fucking good bands out there, man. And you know what? There’s some obscure bands that are even better.

Are there any up-and-coming bands that you think people should be paying attention to?

Barney: There’s a band, one band, that I can think of, a band called Das Oath. They fuckin’ rule. I mean, I never heard of them before I heard the new CD, and I got the new CD totally by chance, and it is fucking awesome. They are an awesome band. That band, to me, is one of the best things I’ve heard in grindcore in years. I don’t know whether you can necessarily class it as grindcore as such, ‘cause it’s very much harking back to what’s before grindcore was even a term, you know what I mean? To me they’re very reminiscent of that era: Negative Approach, there’s Siege, the obvious one, Minor Threat as well to a point … it’s like my favorite new band at the moment.

Well, you’re looking for new bands, but I still think Nasum are, like, the best, pretty much, of the best. I mean, the best new shit I’ve heard from an old band, which is pretty obvious that it’s not really new now, but the latest Infest stuff that they did a few years ago that’s only just pretty much surfaced: it’s perfect as ever, as any Infest stuff.

In whatever category you want to talk about it, where do you see grindcore going in the future?

Danny: I dunno. You know what? I don’t look that far into the future. We just do what we do. We put an album out and we tour it … But I mean, there’s always new bands springing up. Me personally, I don’t think that far ahead … I really can’t say. I would like to see some of the old bands come back. I would love to see Carcass come back for a change. That’s one of my favorite bands. I love Carcass … But that’s not gonna happen, I don’t think. [Repulsion has] been back together. That’s great.

Barney: I really couldn’t say, man. I mean, it’s evolving into all this different stuff, like jazzy kind of whatever, and the only limitations are in the persons’ brains themselves, you know? So I don’t know, unfortunately. I’d like to have a nice crystal ball, but I don’t know where it’s gonna go. Hopefully it goes in good directions.

What would you say would be good?

Barney: I can’t say. I mean, I’m only gonna know that when I hear it, because obviously every genre of music’s gonna have some stuff that’s good, something that’s not so good, because grindcore to death metal, I think it needs something, some kind of angle on it again, because it’s getting pretty stale, you know what I mean? And hopefully grindcore doesn’t go down the same path.