Brutal Truth’s drummer, Richard Hoak, let us know about the release of the second album from one of his projects, End Christian. It’s “not metal tho,” he said. 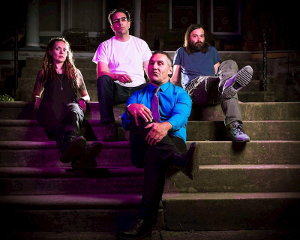 That’s true—the record label describes Bach Part 1 as having electronic landscapes, ambient undertones, and psychedelic drones. That’s accurate, and we could also call it self-indulgent. One example of that is the band purposefully going overboard with autotune on the vocals. Tracks that are more free form, like “Great Escapes” and “Karaoke_So,” work better than ones that have a lot of singing.

Decibel is streaming the entire Bach Part 1 album at its website along with some quotes from the band. Give it a spin. It’s out now on Translation Loss, but bizarrely the label doesn’t specify the format of the album at its webstore.