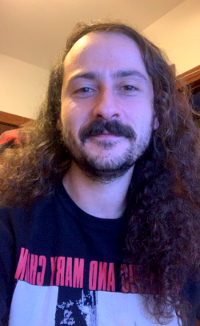 Many festivals and tours have been postponed if not cancelled because of COVID-19, and this is also the case with Chris Moore’s and Robin Zeijlon’s annual hardcore punk fest Damaged City. They cancelled the fest in March when D.C. government put a cap on the number of people allowed in a venue in the city.

Prior to their decision to cancel, Moore was getting messages from friends and booking agents expressing reservations about playing in D.C. “It was kind of before people realized the scope of this whole thing. But I think, like everybody who was organizing an event, it was holding on till the last-possible minute, you know, to pull the plug,” Moore told D.U. over Messenger video.

Besides Damaged City, Moore organizes one-off gigs and is a soundperson around the D.C. region, co-runs a rehearsal space, and tours with bands as their soundperson. He also plays drums in Repulsion, Coke Bust, Aertex, Guilt Parade, The Rememberables, and Disciples of Christ (or D.O.C.).

Maryland Deathfest, held annually over Memorial Day weekend in Baltimore, cancelled its event this year, but impressively rebooked almost all of this year’s bands for next year. But as for Moore, he’s “putting the brakes” on Damaged City and organizing shows, “just because who knows what it’s going to be like in a year, you know? I want to be hopeful and positive and believe that maybe by the fall or the winter, things are gonna start to feel normal, but who knows? And I don’t want to put all that work into reorganizing something when there’s not a guarantee that things are gonna be OK. I don’t think they’ll ever go back to normal,” he said.

To Moore, the pandemic “already has left some permanent damage, I think, on people’s day-to-day lives, but as far as live music or touring or whatever you wanna call it goes, I think it’s gonna scare people for a while, being in a room with more than a few people,” he said. “I would be lying to you if I said that I wouldn’t be thinking about that even two years from now.”

Moore had lice in middle school, and “even after the lice went away, I still would kinda think about it, y’know? ‘Cause it was, like, such a brutal experience, always feeling like something is crawling on you. And I kind of relate that experience to what I could possibly be feeling with this whole pandemic thing.”

Social distancing and the economic shutdown has affected Moore in a number of ways beyond Damaged City. Bands aren’t rehearsing at the practice space, for one thing. “It already has bad ventilation, you know. Imagine some fuckin’ airborne virus baking in there, getting up all in the carpet, just permeating and maybe mutating into something new, some COVID-69.”

He can’t play shows, organize shows, do sound at shows, or tour with bands as their soundperson either. He feels fortunate that none of his bands rely solely on those bands to survive. “I have tons of friends, and I know you do too, whose sole job is playing music, and I’m not in that situation.” There were some gigs this year that he was planning to rely on for some income, he said. “But the biggest thing for me was the sound stuff, like not being able to work sound in D.C.” Moore was also set to tour with “a bunch” of bands as soundperson and do sound at some festivals this year, but those plans were all cancelled. “So that was a pretty big hit.”

Moore also has a dog-walking business, and these days, he said, most people don’t need their dogs walked since they’re working from home. “I’ve probably lost about 90 percent of my business because of this. There’s a few clients, they’re paying a little bit of money every week as if they were getting walks even though they’re not, which is very nice and very generous of them, but it’s not enough to sustain at all.”

Moore knows that most people are in the same boat, and that “I’m over here trying to make the absolute best of everything. Cooking all the time, wading through every ancient canned good I have in my house before we buy new ones, figuring out new ways to use things that I probably wouldn’t [otherwise] use. They don’t always turn out the best, but hell, sometimes you get lucky.”

One thing he can still do is play music at home. He has a drum set at his house, for which he again feels fortunate. “They’ve been really nice to have, honestly. I mean, playing drums is a very cathartic [exercise], so even if you’re not really practicing, you’re just fucking hitting shit. You’re just like, ‘This is great.’” 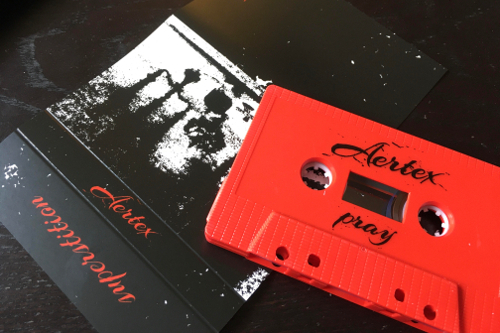 He’s also keeping busy with Aertex. He’s been demoing song ideas and the band has been writing music almost daily. Until recently, he never recorded before. “You know, live sound and recorded sound are pretty different. They share a lot of the same techniques, but I just have never had the patience to figure out recording software, and [the pandemic] kind of forced me to do that, which has been kinda cool.”

Friends have approached him about small-scope remote music projects, but a lot of them have “flaked,” he said. “But I can’t blame them. These are crazy times.”

– The last time D.U. spoke to Moore, it was about Repulsion. Before that, we took a deep dive into Magrudergrind’s record released by Scion A/V (archive ‘zine issue #43, page 2).
– We posted some photos from Damaged City 2015 on flickr.

One Reply to “Chis Moore interview: navigating the pandemic”