That’s the band, not the actor. It’s been an underground trend for a long time to name a band after a person. We think the mold was broken with the powerviolence band that named itself Charles Bronson in the early 1990s, but we digress.

The guys in Henry Fonda were good enough to send over their debut one-sided LP Deutschland, Du Täter! a while back, and it’s a solid record. While listeners will hear some the usual stylistic elements associated with powerviolence (the vocals, the samples) from this Berlin band, there’s also plenty of blast beats (as there should be), pissed-off lyrics in English and German, and dynamics in the songwriting. We always appreciate dynamics. And in addition, the album comes in awesome packaging. They went the extra mile putting this together. It’s on its second pressing but it’s limited, and Apocaplexy has copies. The band has the record up on Bandcamp for name your price too. 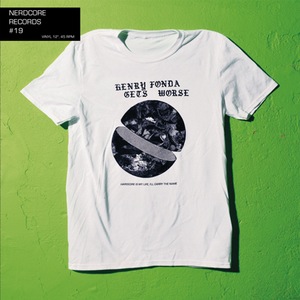 More recently, Henry Fonda has been playing shows and has released a split 12″ with a band called Gets Worse. Apocaplexy has copies of this one too. Consider spinning a track from each side at that site. (It’s also on Bandcamp.)