For fans of space science, the New Horizons probe that did a fly-by of Pluto and its moons in July was the highlight of the year. Lots of different scientists and engineers from several agencies came together to make the mission happen, and that included Brian May from Queen—not only a musician but an astrophysicist. 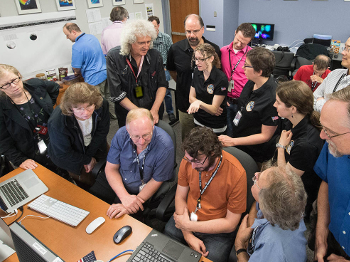 That same month, Dr. May came by the Applied Physics Lab (APL) at Johns Hopkins University and assembled some photos of Pluto sent by the probe.

One member of the team that spent several weeks at APL for the fly-by is Dr. Joel Parker, a New Horizons co-investigator at the Southwest Research Institute. Speaking via email, Dr. Parker revealed that he also works with Dr. May on the European Space Agency’s Rosetta mission images.

When the Rosetta mission team landed the Philae probe on a comet last year, the metal music press picked up that Rosetta project scientist Dr. Matt Taylor was a death metal and grindcore fan. In June, Dr. Taylor won a Spirit of Hammer award at the Metal Hammer Golden Gods ceremony in London, and it was presented to him by none other than Dr. May. That part of the event is below.

Dr. Parker told D.U. that he finds value in Dr. May’s ability to communicate about science and New Horizons in particular to a wide audience. He noted that Dr. May’s social media presence “reaches an audience that is different—some overlap, some not—than the audience that usually frequents science webpages, but still finds space missions and astronomy exciting. I have found a fair amount of overlap with some musical genres—for instance classic and prog rock and metal—and interest in science fiction and fantasy, which also drives interest in real science. A definite connection between musical rock and space rocks.”

Indeed, a large number of New Horizons team members, including Dr. Parker and particularly senior scientists, ops, and management, listen to Queen, he said—they spent a lot of time listening to the band in their youth. Dr. Parker added Pink Floyd, Led Zeppelin, Yes, and Jethro Tull to his playlist.

And as for Dr. May’s reputation as a scientist, among astronomers it is pretty well known that he got his astronomy Ph.D. a few years ago, Dr. Parker said. “It is pretty amazing that someone could leave the field for 30 years, but then come back and actually complete the study and thesis work, and even more amazing that the break was due to becoming an international rock star. But just as important and relevant as him being an astronomer is his interest in stereoscopic imaging.”

Dr. May has written books, created a company dealing with stereoscopic images, and designed a stereo viewer, Dr. Parker said. “That is important because stereo imaging is an important tool in space missions to get real 3-dimensional data of solar system objects. That made a natural fit to New Horizons, which was getting stereo images of Pluto.”

That is the area of expertise Dr. May brought to his work at APL in July. And NASA posted that it’s possible he’ll contribute more to the mission in the future as a science collaborator. Awesome.