We #FeelTheBern at Disposable Underground, but that pales in comparison to the list of creative people who have endorsed Bernie Sanders for president. In September the campaign released a list of a wad of them. Included are names that we recognize here, such as Killer Mike, Belinda Carlisle, Brian Baker (ex-Minor Threat), Jello Biafra, David Crosby, Steve Earle, Scarface (Geto Boys), Thurston Moore, Serj Tankian, Dr. Cornel West, Bill Frisell (ex-Naked City), and Maureen Herman (of Babes in Toyland).

Here’s the complete list (with the help of the Wayback Machine). 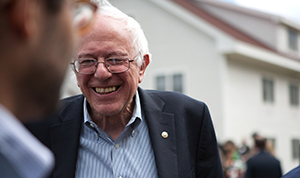 In a video from Rolling Stone, Sanders said he loves music and listens to Beethoven, Willie Nelson, The Supremes, and The Temptations, along with Motown, country, and ’60s music in general. That’s cool.