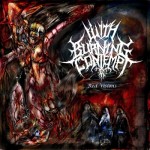 The new band from one of the guys from Project: Failing Flesh, With Burning Contempt is old-school metal with doom sections. We’re talking old Celtic Frost and Winter-influenced old school. The song titles on Red Visions, last year’s CD EP, consist of the title track, “Defaced,“ “We Are Nothing,” and “Untrue Weapons,” so with that, the guitar tone and vocal style, and their influences, it’s clear that these guys are pissed off.

The back of the CD sleeve features the slogan “play this record loud,” and that’s a good suggestion. Your fist will clench and start shaking along with the songs before you know it.

Back in June, the band posted on their Facebook page that they’re running out of CDs, and after they press more copies, they “will concentrate on getting our next thing recorded and released.” Speaking to D.U. via email, guitarist/vocalist Tim Gutierrez provided more details: the next release will probably be a four-to-five-song EP, for which the songs are already written.

In the meantime, give the current EP a spin at the Bandcamp page.