Formed in 2006, the unfortunately named Thrashfire is, according to its bio, “one of the biggest names in Turkish thrash metal.”

Successfully tapping into a vicious early Kreator vibe, opening track “Pure Devastating Necromancy” is otherwise disappointingly formulaic (for fuck’s sake, can we please institute an eternal ban on the recycled-to-death riff that kicks in at the 01:33 mark?). Fortunately, things perk up a bit as Thrashfire introduces a few genuinely well-crafted, catchy riffs into the mix with “Katacombs,” a song which might best exemplify this album’s most notable strengths and weaknesses: these guys are obviously capable of brewing up some inspired, really good riffs, but would mostly prefer to reverentially (and very competently) stick to the same “teutonic thrash by the numbers” blueprints a thousand other bands have followed. 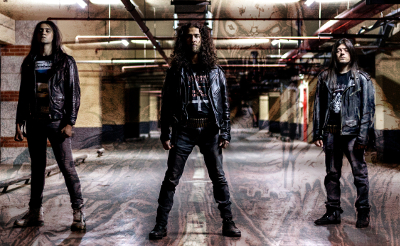 To its credit, Thrashfire does a respectable job of waving the ragged banner of slavish thrash orthodoxy, but I wish the band would take a few risks and color outside of the lines a bit, as it seems entirely capable of yet frustratingly reluctant to do.

Special mention goes to whoever recorded this. It’s a really good-sounding record.

Short Attention Span Summary
If you still somehow have an insatiable appetite for very competently played yet mostly generic thrash in 2020, Thrashfire is your band!
by Mason

Into The Armageddon is out now on CD from Xtreem Music.