Sepultura likes to mix things up. As with their last live DVD Live in São Paulo where they invited different people on stage to perform with them, this time on Metal Veins – Alive At Rock In Rio they’re playing with Les Tambours du Bronx, which a press release describes as a French industrial percussion group that does things like beat 225-liter barrels with bats or axe handles. This team-up works well since Sepultura’s mid-era to later material lends itself to beefed-up percussion. 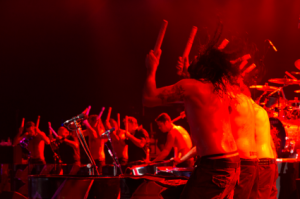 The CD version is energetic and the songs sound cool with the extras that Les Tambours du Bronx brings to the stage. As we can see by the track list below, the release is heavy on later-era Sepultura with a few of the mid-era hits.

The DVD must be much more of an experience than listening to the performance, with all of the Tambours du Bronx guys banging away on stage. 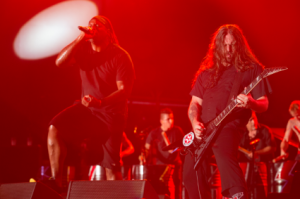 As longtime Sepultura fans know all too well, there’s a divide in sound between the “classic” lineup and what the band has been doing now for many years and several albums. If Live in São Paulo didn’t float your boat, this new live release—the CD version anyway—might not do it for you either. But it’s cool to see the boys getting their collaborations on and sticking to what they’re doing.

It’s out now on on CD, DVD and Blu-Ray from Rock In Rio, MZA Music and Eagle Rock Entertainment.

Related: The last major Sepultura coverage we featured was an interview with Paulo Jr. way back in 1991 in archive zine issue #2.